Matthew Naumec hits a shot during the opening round of the 114th Massachusetts Amateur on Monday at Concord CC. (David Colt)

Arthur Zelmati is looking to make up for lost time.

The 34-year-old from Boston is the leader after one round of the 114th Massachusetts Amateur at Concord Country Club. He did not make a bogey during a round of 3-under 67 on Monday that gave him a one-shot lead on a day when just five players broke par.

Zelmati, who won the Mass. Mid-Amateur in 2020, has to miss last year’s Mass. Amateur due to injury.

The top 32 players after today’s second round of stroke play make the cut for match play, which begins on Wednesday. Maine Amateur ready to unleash a range of talent at Webhannet

You have to hand it to the folks at the Maine State Golf Association. When the group’s 103rd State Amateur gets underway Tuesday at Webhannet…
Read More From Jared Nelson to Matt Parziale, how New Englanders have fared recently

Something about playing golf for the University of Connecticut bodes well should you want to compete for a state amateur title somewhere in New England.…
Read More 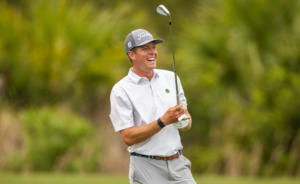 Will Dickson hopes he finally has his golf game going right

Never would Will Dickson tell you that his has been a conventional road. But he would offer that his recent play puts him back on…
Read More
Advertisement