Michael Thorbjornsen stands on the first tee box during the final round of the Travelers Championship in June. (Ben Jared/Getty)

There are those who burst upon the golf scene with such unexpected fury that you are caught unprepared and left to scramble for background.

Then there are those such as Michael Thorbjornsen who leave a breadcrumb trail of successes that pique your curiosity early and build upon it with remarkable consistency.

Consider when you might have first heard about the young golfer from Wellesley, Mass. In 2016, perhaps, when he won his age group in the Drive, Chip and Putt National Finals at Augusta National Golf. A year later, he won the Pre-Junior group in the Mass Golf Junior Amateur.

In 2018 at Baltusrol CC, the 17-year-old Thorbjornsen became only the second New Englander to win the U.S. Junior Amateur. (Brett Quigley of Rhode Island triumphed in 1987.) 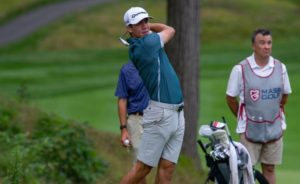 How Michael Thorbjornsen and other New Englanders fared this week